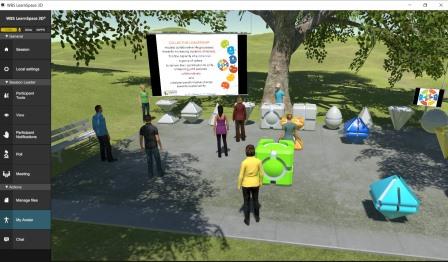 Participants from Cilvil Society learn about and build their capacities regarding practical development topics and approaches to stakeholder collaboration supported by digital dialogue platforms, including how the latter can be used to improve international cooperation. DIGIPEER started in December, 2019 and is a free of cost program for German development NGOs and their implementation partners.

Outcome: A study on how digital dialogue can be enhanced was conducted, in total six online seminars took place, key players of German development NGOs and their project partners were equipped with digital dialogue tools 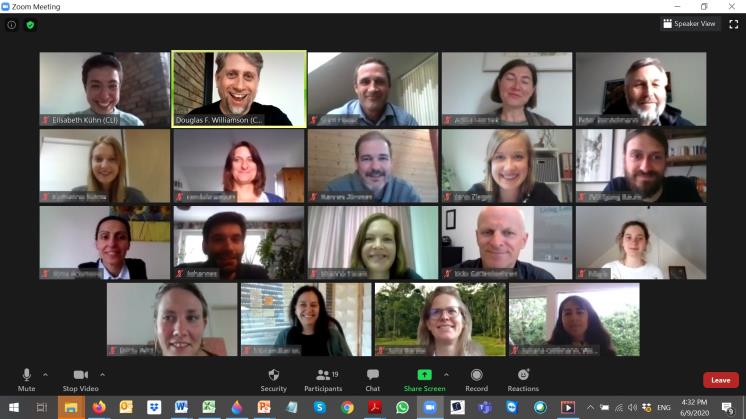 Since 2016, CLI has been the expert for stakeholder dialogues and collaboration processes in the MAP programme. To enhance the design and implementation of collaboration processes with multiple stakeholders, bengo, on behalf of BMZ, offers capacity building through seminars and short focus sessions for German civil society actors and their local partners facilitated by the Collective Leadership Institute (CLI). In 2020, a new advanced training format and online seminars were introduced.

Main SDG: 17 Partnerships for the Goals

Stakeholders: German civil society organizations in the development sector and their international partners

Building a platform for civil society dialogue in Russia and Belarus

In the beginning of June 2020, CLI started the project “Platform for Civil society Dialogue” with a three-day Kick-Off Workshop in cooperation with its Belarusian and Russian partners. The project focuses on the development of a dialogue platform between representatives of Russian and Belarusian civil society organizations who are engaged in the social sector, particularly in inclusion and strengthening rights of marginalized social groups such as women, persons with disabilities, and senior citizens.

Stakeholders: 20 CSOs from Russia and Belarus who are active in the social sector, for each country one partner NGO

Outcome: Increased opportunities for cooperation and partnership between the organizations’ representatives, a constructive dialogue and cooperation structure among civil society organizations in Belarus and Russia, promoted discussion of values.

Kenya - Youth Empowerment and Employment in the Agriculture Sector

This GIZ project aims on increasing youth empowerment and employment, predominantly in the agriculture sector, in Western Kenya. An originally planned workshop for March 2020 in person in Nairobi, was postponed until the end of May, made entirely virtual, and relied on all 12 participants coming from three different provinces. The course was held on the Microsoft Teams platform with CLI facilitators in Germany and Denmark, and participants in Kisumu and Nairobi, Kenya. Over the three-day course, participants learned to use the Collective Leadership Compass and apply it to their individual leadership development, to their collaboration system, and to planning meetings and events to move their process forwards with increased aliveness.

Project Facts:
Youth Empowerment and Employment in the Agriculture Sector

Outcome: Participants applied the Collective Leadership Compass to their individual leadership development, to their collaboration system, and to planning meetings and events. 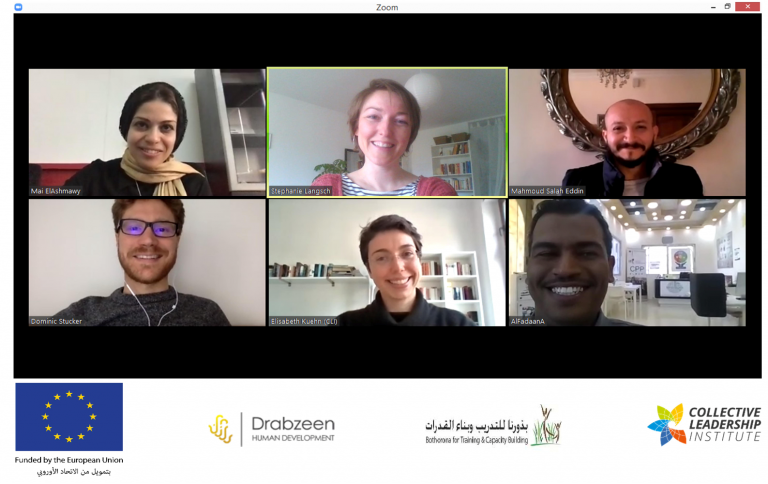 Since early 2020, CLI has been partnering with two Jordanian non-profit organisations, Bothorona for Training and Capacity Building as well as Drabzeen Human Development, in a project funded by the European Union to support three Jordanian communities to develop and realize their own solutions for economic youth empowerment. In order to achieve this, project partners aim to train and support youth-focused and youth-led civil society organizations (CSO) in North Western Badiah, East Western Badiah, and Al Taybeh to initiate and facilitate a structured dialogue among people effected and concerned by the challenge of youth unemployment, such as young citizens, community leaders, local authorities, and the administration. The core project team supports the CSOs to ensure that this is not a dialogue for dialogue’s sake, but a co-creative exchange that comes up with concrete community development initiatives. CLI’s Online Learning approaches have been integrated into the project, providing the means to go fully online with all activities so far, including core project team and external communications, as well as engaging CSOs via interactive and dynamic online sessions.

Current situation: CLI and its projects partners are implementating a fully online engagement mission for the CSOs, including orientation sessions and planning workshops

Announcement of Call for Proposals for eligible Jordanian CSOs
CLI is launching a Call for Proposals in collaboration with Bothorona for Training and Capacity Building and Drabzeen Human Development under the EU-funded project “Empowering Teams of Young Collective Leaders: Transforming Policy Dialogues for Employment Opportunities in three Jordanian Communities”.
CSOs working on youth employment opportunities in

We are particularly looking forward to receiving applications of the eligible CSOs who have already attended the CSO engagement sessions previously announced via Call for Interest.
There will be an online Q&A session on further details to this call on July 7 for Badiah, and July 14 for al Taybeh. Any questions regarding Taybeh can be directed to DHD until July 15 at info@drabzeen.org and questions regarding Badiah can be directed to BTCB until July 8 via info.btcbmafraq@gmail.com

Stakeholders: Staff members of up to six local CSOs and their public and private sector stakeholders on local and national level 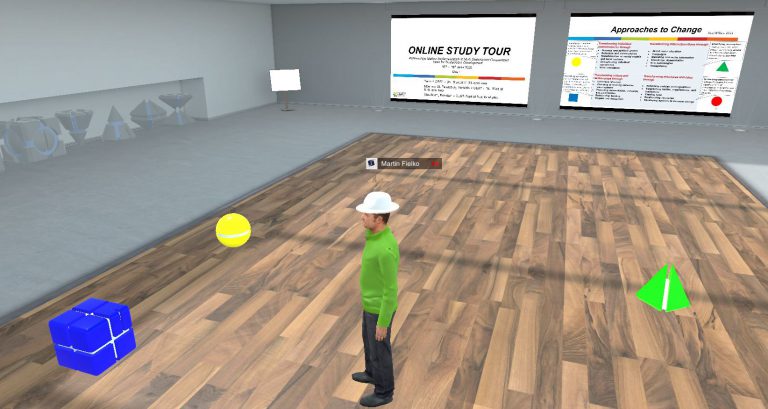 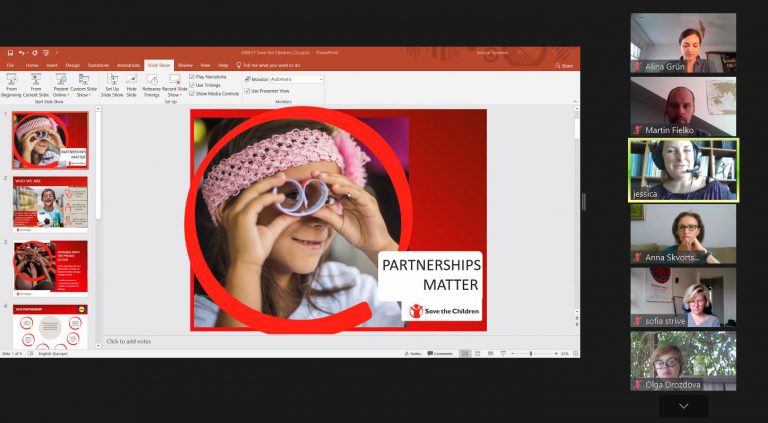 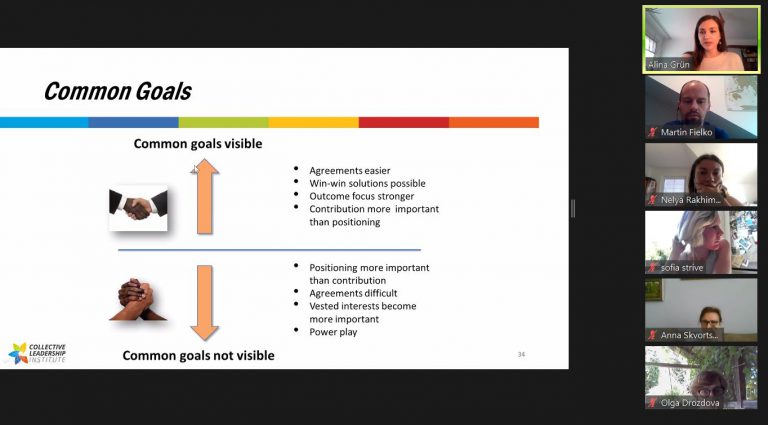 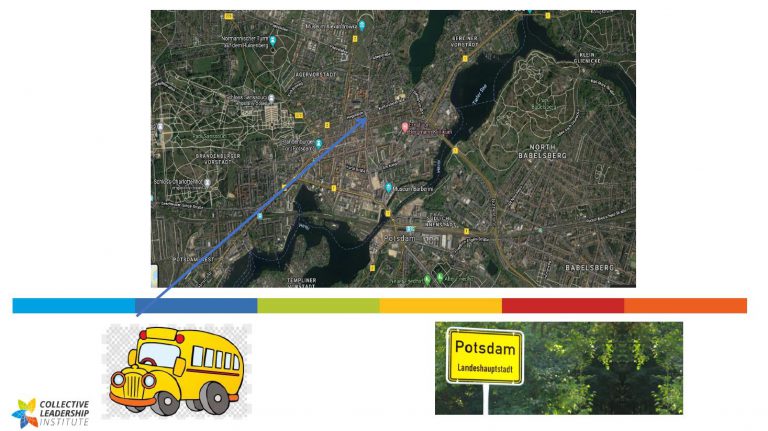 CLI conducted an online study tour called “Partnerships Matter – Implementation of Multi Stakeholder Cooperation Tools for Sustainable Development” for Russian NGOs and their Swedish and German counterpartsin June 2020. The participants learned about the methodology of the Dialogic Change Model, exchanged with practitioners from four German NGOs, and formulated concrete next steps for the working group “civic participation for sustainable development” of the forum. This project was funded by EU-Russia Civil Society Forum.

Outcome: A resource paper on partnerships methodologies and tools was published, the trust and will to collaborate among Russian and EU NGOs increased, a concrete work plan until May 2021 to increase SDG awareness within the EU-Russia Civil Society Forum and beyond was developed. 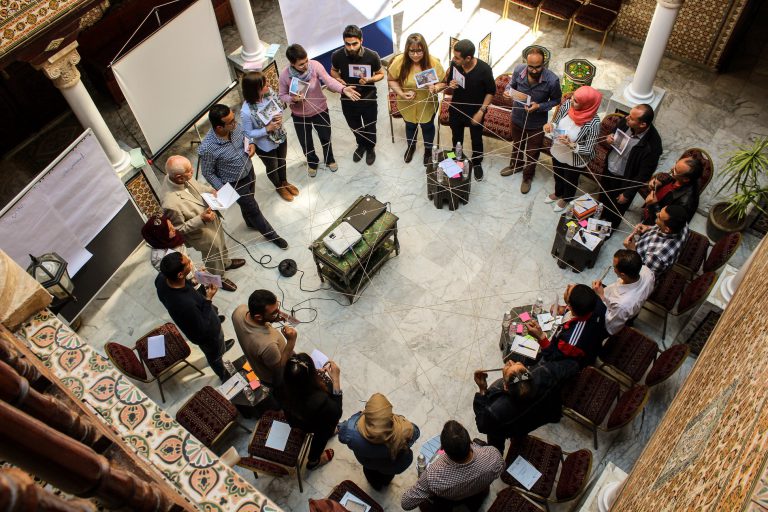 Workhop by We love Kairouan with Stakeholders on creating common goals 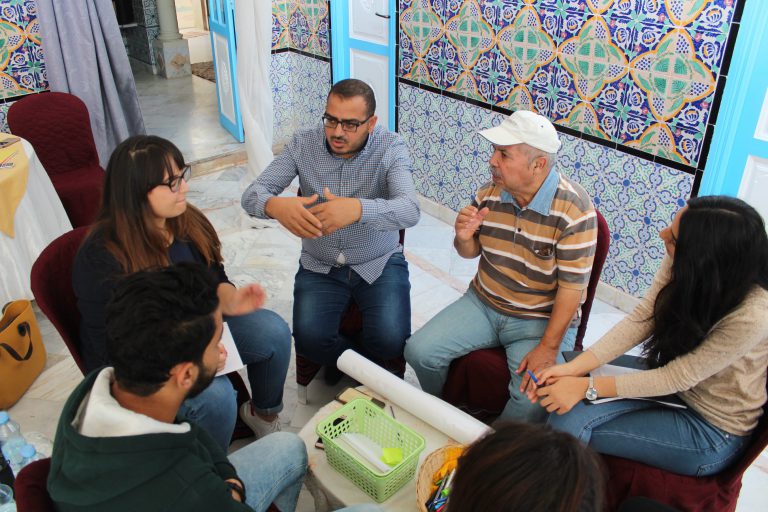 October 2018: Stakeholder Workshop by We love Kairouan to develop collective action plan for the Souk al Mouajel in 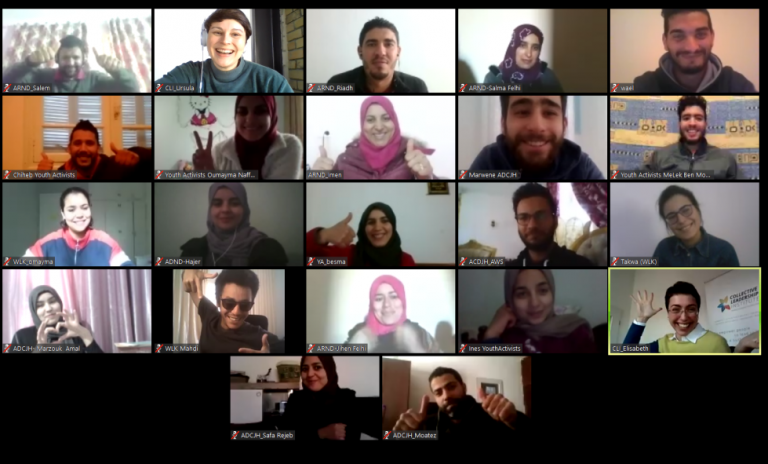 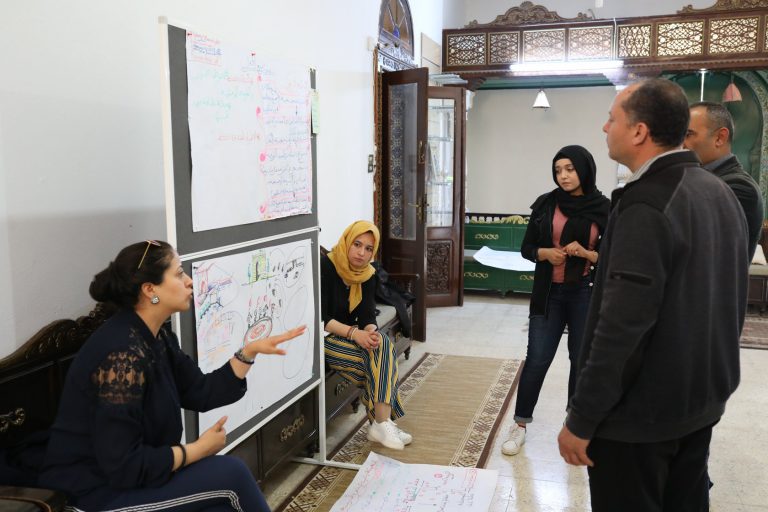 Since February 2017, CLI collaborates with We love Kairouan (WLK), a youth civil society organisation in Kairouan, Tunisia, to strengthen civil engagement, local good governance and decentralisation of the democratic process in Kairouan. WLK supports local identity, culture and environmental awareness in the city and region of Kairouan. With CLI’s transformation support, We love Kairoun developed ‘Bab el Medina’ (‘Gates of the Medina’), an action-oriented dialogue platform between local administration and citizens. Its objective is to develop and implement ideas and concrete actions on the sustainable development of the ancient city centre, the Medina, in Kairouan, a UNESCO world heritage site. The platform is unique in its truly collaborative approach to urban development, where citizens are not merely consulted on their opinions, but co-create a shared understanding of what is important, and what should be done, together with the local public power.

In a trainers-of-trainer approach, CLI and WLK will work over the next two years to upscale the Bab el Medina platform into a regional network: Working with three new youth NGOs – Youth Activists in el Krib, the Association for Natural Resources and Development  (ARND) in Regueb and the Association for Youth and Cultural Development in Hergla (ACDJH) – CLI and WLK will train and coach together project teams from these associations to set up their local dialogue platform for sustainable development with stakeholders, and eventually to come together in a regional youth leader network for good governance.

Current situation: CLI and WLK co-facilitated an e-tailor-made training based on an integration of the Collective Leadership Compass and the Dialogic Change Model. All new NGO participants framed their initiatives with local stakeholders, identified key stakeholders and developed an engagement plan for those stakeholders to test their context analysis and create resonance for the initiative in the next 3 to 4 months. The initiatives developed were sustainable agriculture in the Regueb (ARND), promotion of local culture and urban development in Hergla (ADCJH) and an eco-tourism village in el Krib (Youth Activists).

Next steps: In the next weeks, WLK with needs-based support from CLI will accompany and coach the NGOS to implement their engagement plans for their initiative. Their results will be the basis for the next e-tailor-made training in June, where process plans for strategically building the platform will be developed.

Based on the huge success of the action on the Souk, the second initiative by the platform will focus on the environmental aspects in the Medina. Points of interest are in particular the reduction of pollution through dysfunctional waste management and exhausts. Accordingly, the Bab el Medina platform has been expanded to also include the National Waste Management Agency and the New Environmental Police. Citizens and local public officials on the platform chose the area around Rahba Place in the Medina to develop a comprehensive plan for a sustainable redesign of the city’s area, including energy efficient public transport, pollution reduction and improved waste management and recycling. The platform is organized into task forces advancing the funding and implementation of each step of the plan.

Outcome: An action-oriented dialogue platform between local administration and citizens was created, a sustainable architectural restoration of the Souk al Mouajel and a sustainable urban development plan for a city quarter in Kairouan was created; a regional youth leaders network and local actions in el Krib, Hergla and Regueb are in development 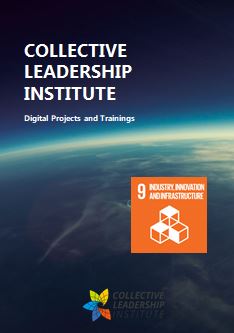 Find a selection of CLI's digital projects and training offers.

CLI's impact in the MENA region